Cscarfs Story and Crufts 2012 Best Dog CC Best of Breed shortlisted in Hound Group. the photo below was taken at Welks Show Judge Stella Blackmore Dog CC and BOB this gives him his Champion Title, superb movement captured again with "four feet" of the ground. 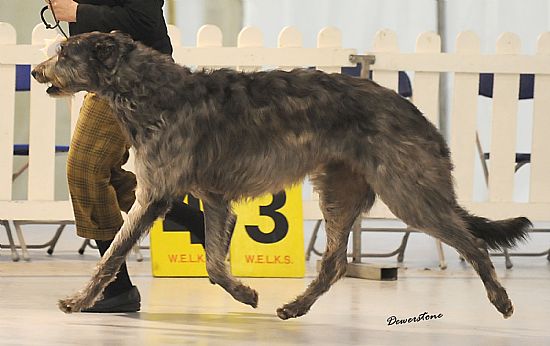 ( scroll down for videos and pics thankyou )

I spotted Cscarfs mother Cute Coney at Crufts I thought she was outstanding so approached the owner and asked to book a puppy. Coney father Fritzens Great Gatsby, mother Edle Welzberg

Cute Coney then came to Ardneish from Holland to try and get a mating with my Rosslyn Obi he was only 10 months old so no joy,

I then suggested to Caroline Van Zanten that Pyefleet Percy maybe a good alternative and of they went to Mary Girling at Brightlingsea and dear Percy kindly obliged.

Great news Coney in whelp to Percy puppies born and a photo sent to me when they were two days old, all the puppies had a different coloured bit of wool around their necks my eye was drawn to “Turquoise String” and I said I really liked that puppy , five weeks later I fly to Holland Caroline had chosen her puppy Calhoun and I had not changed my mind from the photo I thought “ Turquoise String” was the one for me he was a boy and I had wanted a girl originally but there was something about him that I just soooooooo loved. Three more visits to Holland to see how he is growing.

I pay for Cscarf and visit him in Holland 3 more times as I was so keen to have my puppy and to see how he is growing and I want him to know me,but had to wait as EU legislation means he has to stay for this time due to Rabbies vacination.

10 months later Caroline brings him over to England as she is judging the limited show I pay for his food/keep and am so happy to have this puppy with me back in England where he was made. Cscarf was a little nervous at his first show but in time he settles and we have fun showing were he picked up numerous first prizes and then won Best Dog and the CC at Scottish Breeds Show under respected breed specialist Mrs Jean Blandford (Flaunden) so very very special to win this under such a judge and in Scotland our favourite show Scottish Breeds.
Cscarf then wins a Reserve CC under Breed Specialist Miss Claire Churchill along with other prizes.

We then go to Crufts with his breeder and friend Sonya who had stayed here at Mollys for 3 days  who then  handled him beautifully to Best Dog the CC and Best of Breed under Respected  Hound judge Mrs E Mcdonald who I have been told used to enjoy the "Dava" joint Saluki and Deerhound Coursing meeting ( Happy times now sadly lost to us ). Thanks must go to Sonya for her handling and to the breeder.

I then take over as I wanted to handle “My little Dutch boy” in the group were I was thrilled that he was cut to the last 10 out of 26 other Best of Breeds.

Cscarf has only ever been lightly shown , I decided to not put my Kennel Name onto him as my peers in the breed some now sadly in the “happy hunting grounds” did not do this with famous hounds such as Ch Rosslyn Carric, and also Miss Noble of Ardkinglas my great mentor did not approve of it.  I so respected them for this as they wanted the credit to go to the breeder as I did , that I decided to follow in their footsteps.

Cscarf is much loved here at Ardneish he is my companion and lies in front of the fire he is my friend first and foremost but I was thrilled with his Crufts win. There also seems to be confusion as to who owns Cscarf   Hence me feeling the need to tell “Cscarfs story “.

But the most important thing is Cscarf, and I adore him the good friend that he is to all of us here at Ardneish I do want to say to everyone that  we all really do take the best ones home.  :-) we must never forget that. :-)

You can see Cscarf at around 8 mins in and again at 24 minutes into the video but its great to see the whole of the group some super hounds in it! 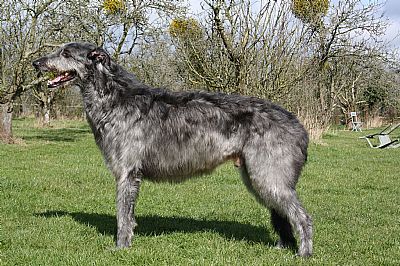