Back to Home page 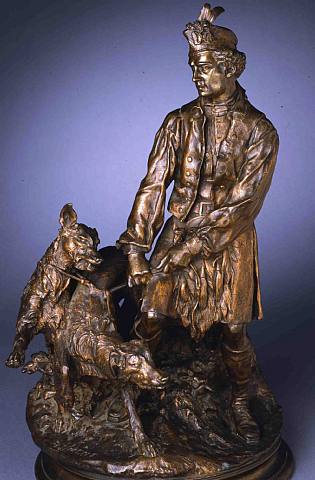 From the writings of Mrs. "Abbotsford" Armstrong:
"If anyone wants a delightful companion, one who will give all his great heart's devotion to his owner, who will either rejoice in the gaiety of a happy mood, or noting the serious humour of his beloved master, walk with his muzzle in the hand he so loves, let them before all other breeds, keep and cherish that most noble, most historic and romantic dog, the Scottish Deerhound." 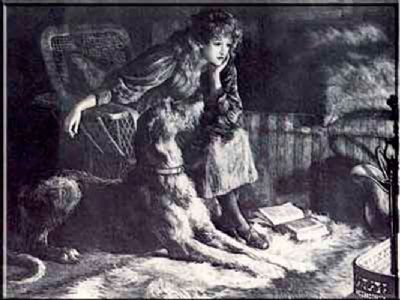 The origin of the Deerhound breed is of such antiquity and the earliest names bestowed on it so inextricably mixed that no sound conclusion can be arrived at as to whether the Deerhound was at one time identical with the ancient Irish Wolfdog and, in the course of centuries, bred to a type better suited to hunt deer, or whether, as some writers claim, he is the descendant of the hounds of the Picts. Very early descriptive names were used to identify the purpose of the dog rather than to identify species. We find such names as "Irish Wolf Dog," "Scotch Greyhound," "Rough Greyhound," "Highland Deerhound." Dr. Caius, in his book Of Englishe Dogges (1576) speaking of Greyhounds, relates: "Some are of the greater sorte, some of a lesser; some are smoothe skynned and some curled, the bigger therefore are appointed to hunt the bigger beastes, the buck, the hart, the doe."

At all times great value has been set on the Deerhound. The history of the breed teems with romance increasing in splendor right down through the Age of Chivalry when no one of rank lower than an earl might possess these dogs. A leash of Deerhounds was held the fine whereby a noble lord condemned to death might purchase his reprieve. Records of the Middle Ages allude repeatedly to the delightful attributes of this charming hound, his tremendous courage in the chase, his gentle dignity in the home

The high valuation of the Deerhound is not the result of rarity so much as the fact that as a hunter he is pre-eminent, with a high aggregate of desirable characteristics. He has a keen scent, which may be used in tracking, but it is that combination of strength and speed necessary to cope with the large Scottish deer (often weighing 250 pounds) that is most valued. The hounds are usually hunted singly or in pairs. Centuries of hunting as the companions and guards of Highland Chieftains have given the Deerhound an insatiable desire for human companionship. For this reason the best Deerhounds are seldom raised as kennel dogs. In character the Deerhound is quiet and dignified, keen and alert, and although not aggressive, has great persistence and indomitable courage when necessary. While it might savor of boasting to claim that the Deerhound of today is identical with the dog of early history, descriptions of which are mostly legendary, it is nevertheless a well-established fact that in type, size, and character he closely conforms to authentic records of the eighteenth and nineteenth centuries.